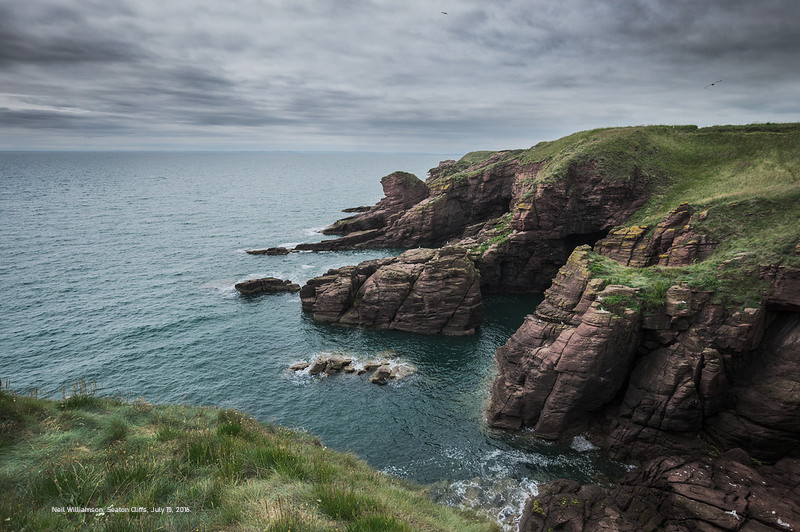 Comes out of the town. Comes out of Hayshead or Brechin Road or Demondale. There’s spilled chips and broken bins and a twitch to his torso.

To Seaton, the cloying Den, down to the Flairs’ stony bay and up to the cliffs.

He doesn’t know if it’ll happen today, but he knows it will happen one day. He’s not planned it, there’s never been a plan, he’s never thought about afterwards.

There’s not long to wait but then he’s not waiting. He’s only walking, a tic-man on the path at the top of the cliffs, the sea cliffs where seabirds wheel below him.

tic-man tic-man the birds shout off the rocks, their voices carry to the cove where the seals haul.

He slips back a yard to watch her thighs rub, the width of her arse, to feel the sticky stench of her hair. He sees her legs and her arse and her head turn as he jerks along the path, just a pace behind.

He could bury his hand in the flesh of her back. His hands, his fists. Bury them in all of that.

She’s fast now, down she trots on the slubbed path to the promontory, together they’re a pantomime cow. See the red arches and the red caves, the cities of white birds screaming. His breath’s on her lobes. There’s a red stone turned in his hand.

She’s at the edge of the cliff. The cow’s at the end now. Stupid cow.

But when the stone comes down she’s slipped away like a flipper and he’s the one who’s falling.

He twists, drops, the fat woman’s at the top of the cliff, smiling, of course she smiles, his body winds around the wind, there are women on a shelf of rock, almost a circle of women, and waves froth over their feet.

His clouding eye won’t see his ribs bent brittle or ligaments pulled off the bone or the skin riffled and flayed from muscle or the women peel off their clothes and stow them above the tide. It won’t see them don their skins, sky-grey, pebble-grey, dappled-seal-grey. Won’t see them swim out to the cove to bask in delight.

They come to land and shed their skins to seduce and win and it’s a harsh wooing. They wait for raging young men to come out of the town. This year or next, they always get one.